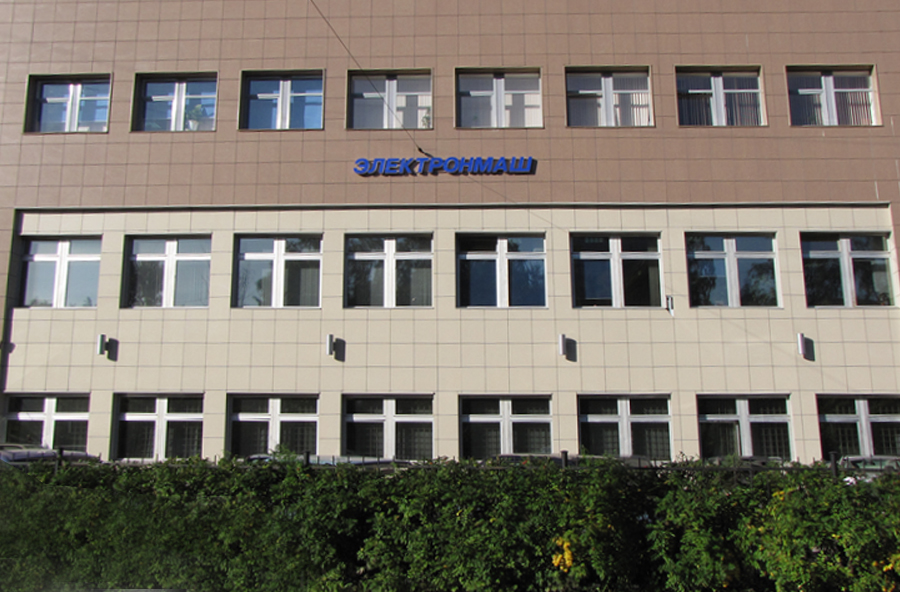 Today CJSC Electronmash has strong positions on the Russian market of electrical and automation equipment. The company staff numbers more than 200 highly qualified specialists. All products are certified.

Business is almost a game of chess, with its common gusto and the desire to succeed. Once you play a wrong card – you face problems. But if a losing in the board game is just a loss of the top place, in business a misstep threatens a businessman with much more serious and long-lasting consequences.

And in business – the same as in chess – once you make the first right move on the market then continue on with the second and the third one. The company’s standing is steady and predictable. The development and prospects are predictable for several years, moves ahead. But, just as in chess, even one blunder, the wrong move can throw off the company back or lead to the checkmate. Valery Nazarov, Electronmash CEO, whom we met on the eve of the company’s tenth anniversary, shared his comparisons of business and sport with us.

– Today, we are among the five largest electrical companies in the North-West region, - said Mr. Nazarov.

-I am sure that over the next year or two we will enter the top three, then, maybe, we will head the list - our company stands a good chance to become the first among similar companies in the region.

The CEO’s statement may seem overconfident. But the company has every reason for such large-scale plans.

– What did the company start its activities with?

– We started as a commercial entity, gradually becoming a manufacturing enterprise. From the first days of work we evaluated the significant potential of Russian enterprises and immediately focused on the industrial sector. In the 1990s, the Russian electrical industry could hardly boast of even a single product of good quality. By choosing a clear position - to offer qualitative equipment - we set our sights on the world's leading manufacturers and decided to act as a distributor of the Western technologies. We had to get a standing start and oriented ourselves to the manufacturers with high quality products.

Now our company cooperates with many famous manufacturers such as ABB, Schneider, Siemens, GBE, El Steel. Although our first partner was ABB, which culture, the level of business and the products conformed to our conception of the electrical product and what we wanted to offer the Russian market. Until now, we are not disappointed in our choice. Our partnership with ABB is advancing, and the turnover between the companies has grown tenfold since that time.

Over time, in the course of operations it became necessary to organize a small production facility for electrical equipment assembly on our own base. Three years later, our company began to tackle more ambitious production targets. And now we have reached the level of the best among the Russian producers of 0.4-6-10 kV electrical switchgears.

– I am sure that there is no domestic enterprise organized simultaneously with us that in terms of the development rate, volume and quality of the products is ahead of us.

– How did you manage it, in addition to the fact that you were focused on the quality and accuracy of decision-making?

–We focused the main effort on our own production. In the early years, the commercial activity took 100 per cent of our turnover, gradually own production began to grow and took a share of 60 percent, now it is already 70 percent of the company's turnover and the commercial component amounts to 30 per cent. I think this is the optimal ratio helping to support a well-balanced selection.

In addition to changes within the company, the policy of our customers and consumers also changes. If before the customers formulated their requirements to the product less clearly, now they want to be confident in its quality, compliance with all their requirements, including GOST and TU requirements. Many of them are introducing their own systems of certification and licensing. For the moment, our equipment has been certified by Gazprom, JSC FGC UES. The company’s QMS meets the requirements of GOST R ISO 9001, and we are also entitled to supply equipment to nuclear power plants and marine vessels.

In my opinion, one of our strengths is that we have grown from the ground up, and in comparison with the established stereotypes prevailing at older plants, we were, generally speaking, free from the "weight of traditions", which, as proved by the practice, do not always have a positive value. Judge for yourself: the technology proven for years and production standards typical for many electrical companies of the post-Soviet space - that's good. But at the same time, with such rapid development of new technologies those who are accustomed to their old way of doing business and conducting production operations find it difficult to change something immediately, implement the know-how instantaneously to maintain their position on the market.

We had neither existing corporate culture, nor well-established traditions of doing business, nor the established group of employees. On the contrary, people come to us from other companies and brought the advanced elements of other “cultures”, due to this we developed, sometimes even faster than any other player in the sector. We have a young team with a flexible management system. Speed of decision-making is dictated by obviousness and soundness. It is very important for young professionals when their proposals are fairly and properly assessed and implemented. This is one of the ways of their self-realization.

– What difficult times that are typical for a company like yours have you experienced?

– There were a few periods in the growth of the company. There were about 30 people in the team, everything was solved quickly, and the head knew what’s happening. When the number of workers increased, the management system also changed, tracking and structuring became complicated. In company where 100 people began to work we had to introduce improved management systems. That very period it became necessary to implement the ISO system and to improve management, department performance, electronic document management, archiving, etc., in accordance with the requirements that this system imposed. In terms of the level and quality of task execution we had to go through these stages under the conditions of production growth. We reinforced these directions at the proper time. And for the time being my skills as a leader and the level of intelligence of my colleagues are sufficient for the company, but we have to raise constantly the level of education.

– You tell about the business from the viewpoint of a person; your landmarks are the people, not the plans, products, economic figures. Do you think that the success of the company depends a lot on the personality of the head, and did you manage it?

At the first stage the top managers has 50 percent of success and responsibility for the business. But at the same time the merit for the company success, of course, belongs to the people who work in the team. Now the tasks are divided between the departments and the employees. And I always emphasize, success can only be achieved by a team of like-minded people. Then there will be a good performance, and long-term plans.

– "System Solutions" - this phrase can be considered the motto of your company. But other companies can boast of such decisions. How do Electronmash’s "system solutions" differ?

– “System Solutions” of our company mean a well-balanced assortment policy. We have studied the demand for all our products before launching them into production or entering into the distribution agreements. Our products complement each other, enabling the customers to build the technologies of their production processes. We continue to improve in this area, now offering the customers an additional service: design, installation and commissioning.

– If you compare the industry a decade ago, and now, what has changed and what has remained the same? What is the behavior of the customers and competitors, has it become more complicated or simpler to sell the products?

The market has civilized. The Electrical Engineering is quite a conservative industry. In the 1990s, less attention was paid to the quality management system, so to speak - it did not actually exist. It was necessary to solve the problems and they were solved, but how and by what means - it was secondary. Today the property owners - Russian and foreign ones - who begin to count the money and invest in the equipment reliability and safety, have appeared in the industry. An abrupt qualitative transition to more advanced technologies and management techniques has taken place. This has affected the balance of power in business, those who were big and serious 10 years ago and could re-organize themselves in the process, have become even bigger and those who were not re-organized – have given ground. A lot of interesting new vendors have come into existence.

– Your company is a distributor of foreign brands. How do you rate a Russian manufacturer?

Of course, in recent years, many Russian electrical companies were modernized, developed new products, which are equal in terms of technical characteristics and consumer qualities to their foreign analogues, and began producing modern electrical equipment under the license agreements with foreign companies. As a positive example I can name GK Tavrida Electric CJSC, PO Eltehnika OJSC, STC Mechanotronics.

– Often companies cooperating with foreign manufacturers, complain of the imperfection of the Russian legislation and the regulatory framework in terms of compatibility with international industry standards. Do you agree with that?

–The requirements of the Russian regulations and foreign standards are generally consistent in our industry.

In my opinion, the issue of customs duties on electrical equipment and components imported into Russia from abroad is more important. A paradoxical situation has come about when foreign finished electrical equipment competing with the equipment manufactured in Russia, is imported into the country duty-free, while the import customs duties on the components for assembling the similar products at the Russian plants are from 5 to 15 percent.

– Your company now has an extensive regional network. When and why did the idea to enter the Russian regions start up? What areas are now the most profitable in terms of sales of products? In what regions is the demand less expressed? And what do you undertake to improve the situation?

The company is growing and from the very beginning we focused on the companies that had both feet on the floor and could afford decent equipment. These were the oil producing companies and oil refineries. They are mainly located in the Siberian region, so we decided to focus our efforts in this direction, and then began to promote the products to other regions of the country. Now we are going to improve the product promotion scheme due to integrating the efforts with the regional installation companies - they will make money out of installation, and we – out of product volume.

– What new developments and products are you planning to bring to the market in the near future? What are you working on to fill the order portfolio for the next year?

The main new development is 35 kV switchgear. Now our product range is limited by the equipment rated 0.4-10 kV. It is a significant segment of the market, but there are a lot of players on it as well. Companies manufacturing equipment of 35 kV are in minority - about 10 in Russia.

This product is currently being tested; the finalization and improvements are being made. In other words, the product should be got into shape. And then we'll decide what direction to move next. In the coming years, we still have enough areas for development and growth.

As the head of the manufacturing company, I would like to increase the output by three times by 2015.